The internet freedom activist committed suicide on Friday at age 26, but his life was driven by courage and passion 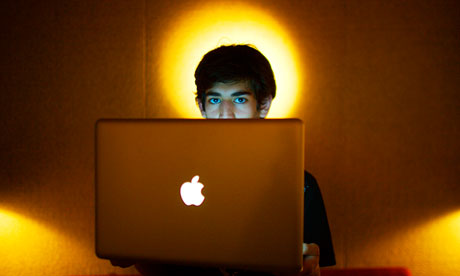 The internet activist Aaron Swartz, seen here in January 2009, has died at the age of 26. Photograph: Michael Francis Mcelroy/AP

Aaron Swartz, the computer programmer and internet freedom activist, committed suicide on Friday in New York at the age of 26. As the incredibly moving remembrances from his friends such as Cory Doctorow and Larry Lessig attest, he was unquestionably brilliant but also – like most everyone – a complex human being plagued by demons and flaws. For many reasons, I don’t believe in whitewashing someone’s life or beatifying them upon death. But, to me, much of Swartz’s tragically short life was filled with acts that are genuinely and, in the most literal and noble sense, heroic. I think that’s really worth thinking about today.

At the age of 14, Swartz played a key role in developing the RSS software that is still widely used to enable people to manage what they read on the internet. As a teenager, he also played a vital role in the creation of Reddit, the wildly popular social networking news site. When Conde Nast purchased Reddit, Swartz received a substantial sum of money at a very young age. He became something of a legend in the internet and programming world before he was 18. His path to internet mogul status and the great riches it entails was clear, easy and virtually guaranteed: a path which so many other young internet entrepreneurs have found irresistible, monomaniacally devoting themselves to making more and more money long after they have more than they could ever hope to spend.

But rather obviously, Swartz had little interest in devoting his life to his own material enrichment, despite how easy it would have been for him. As Lessig wrote: “Aaron had literally done nothing in his life ‘to make money’ … Aaron was always and only working for (at least his conception of) the public good.”

Specifically, he committed himself to the causes in which he so passionately believed: internet freedom, civil liberties, making information and knowledge as available as possible. Here he is in his May, 2012 keynote address at the Freedom To Connect conference discussing the role he played in stopping SOPA, the movie-industry-demanded legislation that would have vested the government with dangerous censorship powers over the internet.

Critically, Swartz didn’t commit himself to these causes merely by talking about them or advocating for them. He repeatedly sacrificed his own interests, even his liberty, in order to defend these values and challenge and subvert the most powerful factions that were their enemies. That’s what makes him, in my view, so consummately heroic.

In 2008, Swartz targeted Pacer, the online service that provides access to court documents for a per-page fee. What offended Swartz and others was that people were forced to pay for access to public court documents that were created at public expense. Along with a friend, Swartz created a program to download millions of those documents and then, as Doctorow wrote, “spent a small fortune fetching a titanic amount of data and putting it into the public domain.” For that act of civil disobedience, he was investigated and harassed by the FBI, but never charged.

But in July 2011, Swartz was arrested for allegedly targeting JSTOR, the online publishing company that digitizes and distributes scholarly articles written by academics and then sells them, often at a high price, to subscribers. As Maria Bustillos detailed, none of the money goes to the actual writers (usually professors) who wrote the scholarly articles – they are usually not paid for writing them – but instead goes to the publishers.

This system offended Swartz (and many other free-data activists) for two reasons: it charged large fees for access to these articles but did not compensate the authors, and worse, it ensured that huge numbers of people are denied access to the scholarship produced by America’s colleges and universities. The indictment filed against Swartz alleged that he used his access as a Harvard fellow to the JSTOR system to download millions of articles with the intent to distribute them online for free; when he was detected and his access was cut off, the indictment claims he then trespassed into an MIT computer-wiring closet in order to physically download the data directly onto his laptop.